‘Aap’, ‘noot’, ‘Mies’ during a language walk: “It is different than learning in a classroom”.

“Bruggetje (bridge), fontein (fountain), vijver (pond)”. Students name everything that passes by. In the Henri Dunant Park in Eindhoven, a small group of expats and migrants from the region got acquainted with the Dutch language on Thursday, by means of a walk.

A summer course in Dutch*, not held in the classroom. “In class, you immediately see the picture, that’s much easier and there’s nothing spontaneous about it. You read something and you know exactly what it says, which is different here in the park”, explains language trainer Brigitte van Beek.

The course given by Summa College is not in the summer for nothing. “We have noticed that during the summer months people go on holiday or do not speak much Dutch. With this course we want to keep the language level up. Otherwise we would have to start all over again in September, which would be a shame”, explains Van Beek.

During the walk, all kinds of objects are pointed out and the course participants have to try to guess what Van Beek means. “It is very accessible, you come across all kinds of things here in the park and you also move around. You also notice the different language levels. Some course members can already make complete sentences and others are really coming into contact with Dutch words for the first time.”

The walk ended in De Splinter play park. Besides the walk through the greenery, Summa College has other language courses planned for this summer. There will be tours through a supermarket and Strijp-S. 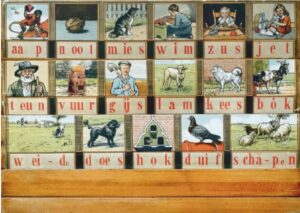