Three Chinese EV battery and material companies are tapping investors for more than $ 10bn in new funding, as the country cements its dominance over global clean tech supply chains.

The combined fundraising by the three Chinese groups – CATL, Tianqi Lithium and Huayou Cobalt – eclipses the hundreds of millions of dollars being spent by Washington and key US allies including Australia and South Korea to chip away at China’s supremacy in the sector.

“China is trying to position itself as the Saudi Arabia of clean tech hardware, being the lowest cost supplier and achieving the highest market share,” said Neil Beveridge, a senior analyst at Bernstein in Hong Kong. “This is a massive geostrategic competition between China and the west.”

Factories in China currently account for nearly three quarters of global EV battery production. The superpower commands a 90 percent market share for processing rare earth elements – the oxides, metals and magnets used in batteries – a level of dominance akin to its stronghold over the solar industry.

CATL, a key supplier to Tesla and Chinese homegrown automakers such as Geely, kicked off its Rmb45bn ($ 7bn) private placement last week, pricing its shares at Rmb410 per share on Wednesday. Including the latest jumbo stock sale, CATL has raised around $ 13bn since it listed in Shenzhen in 2018, according to Financial Times calculations and Refinitiv data.

Foreign investors were keen to participate. JPMorgan, Barclays, Morgan Stanley, Macquarie and HSBC all grabbed a share from the jumbo sale, accounting for about 32 percent of total offered shares.

Shenzhen-listed Tianqi Lithium, one of the world’s top producers of lithium chemicals for electric vehicle batteries, is aiming to raise $ 1bn to $ 2bn in a secondary listing in Hong Kong, according to an investor close to the firm.

The fundraising will be the Hong Kong exchange’s biggest this year, even at the lowest range, according to Dealogic. Mainland shares of Tianqi have surged more than 21 percent since the start of June.

Hong Kong-listed Huayou Cobalt, another major Chinese raw material supplier, plans to raise up to Rmb17.7bn via a private replacement. Most of the new cash will be used to expand production at its joint venture in Indonesia, where it processes nickel, a critical material for EV batteries.

More than 90 percent of the world’s battery grade lithium is also produced from refineries in China, which also processes the vast majority of cobalt and nickel, other key battery materials, according to Trafigura.

The west has been slow to respond to China’s dominance. Earlier this month, the US Department of Defense signed a $ 120mn deal with Australian-listed Lynas Rare Earths to build one of the first domestic American heavy rare earths separation facilities. In February, the Australian government stumped up a $ 100mn loan to Hastings Technology Materials to develop a rare earths mine and refining plant in Western Australia.

As EV demand grows, global battery capacity is expected to increase by 40 percent annually through 2025, to 3,252GWh from 823GHh in 2021, according to Bernstein forecasts. China’s EV battery capacity market share will decline marginally as the US and Europe offer generous subsidies to have plants built closer to their carmakers, but still stand at about two-thirds by 2025.

Europe’s footprint will expand to 20 percent from 15 percent today, and the US to 12 percent from 8 percent. CATL will hold its current 20 percent global market share through 2025.

However, China’s cost advantage is set to improve. Factories built in China have a per unit cost of around $ 60mn per gigawatt-hour, thanks to their massive scale. But it will shrink even further, to around $ 50mn / GWh in the coming years as the size of the plants expand rapidly. 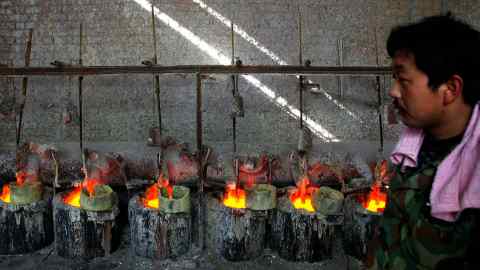 That compares to a global average of around $ 78mn / GWh over the next 10 years. The cost of new European battery plants already tops $ 120mn / GWh.

“It’s not just a fear that China might act egregiously, it’s simply a fact that they have huge local demand,” Gregory said.

South Korean companies, including CATL rivals LG, SK and Samsung, are among those racing to reduce reliance on China for critical battery materials from more than 60 percent today.

But in a sign of the allure of China’s cheap batteries, the Kia brand of Korean auto group Hyundai plans to use CATL batteries in a new EV, marking the first time non-Korean-made batteries will be used in the domestic market.