Many Gen Zers are opting to eat pizza instead of turkey this Thanksgiving as prices associated with staple foods of the holiday have skyrocketed amid inflation, with other Americans reporting they can’t cover the cost of dinner at all.

New polling reflected the changes Americans would be forced to make this year as they head home for the holidays to watch football and eat with their families.

One in five Americans said they were afraid they wouldn’t be able to cover the cost of Thanksgiving dinner this year, while a whopping 88% of respondents said they would cut at least one dish from the meal.

Around 33% of those celebrating ‘Friendsgiving,’ a popular riff on the holiday that usually sees young people dining with their friends, will serve pizza this year over an expensive turkey.

Only 24% said they would serve turkey at all, highlighting the often-overlooked prices associated with the holiday. 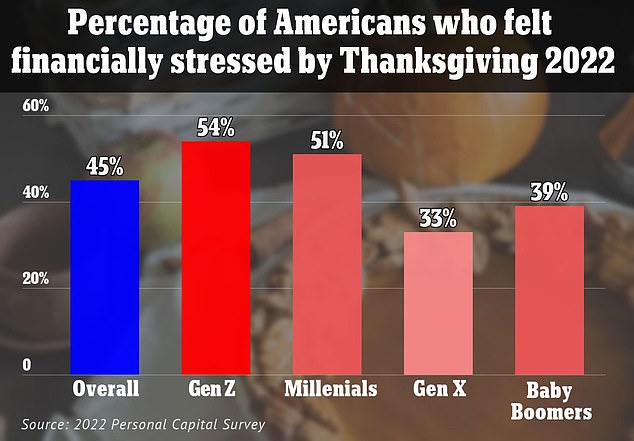 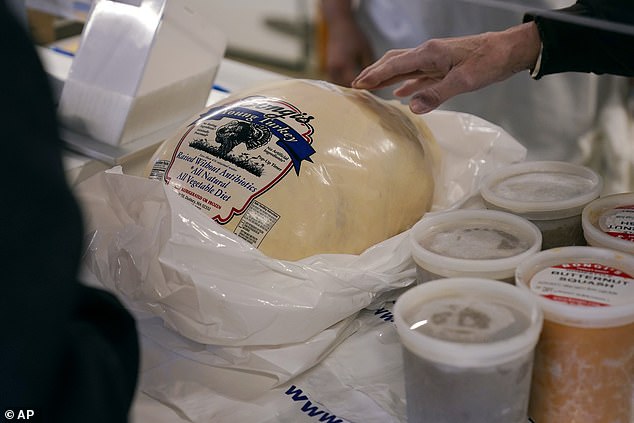 The cost of groceries has risen by 12.4% in October, according to the most recent Consumer Price Index 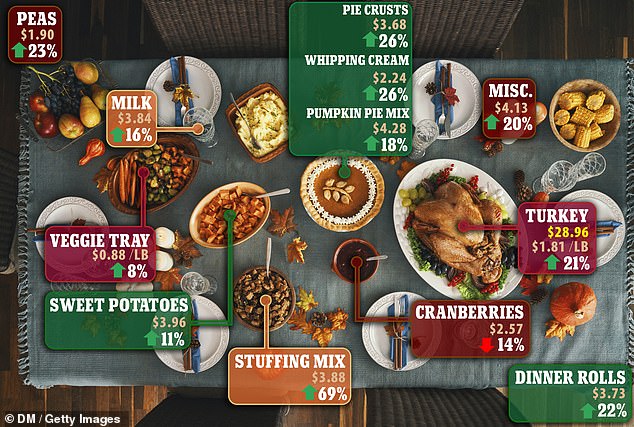 Americans are poised to spend $64.05 on a Thanksgiving meal for 10 people – 20 percent more than last year as the prices of nearly all foods have gone up 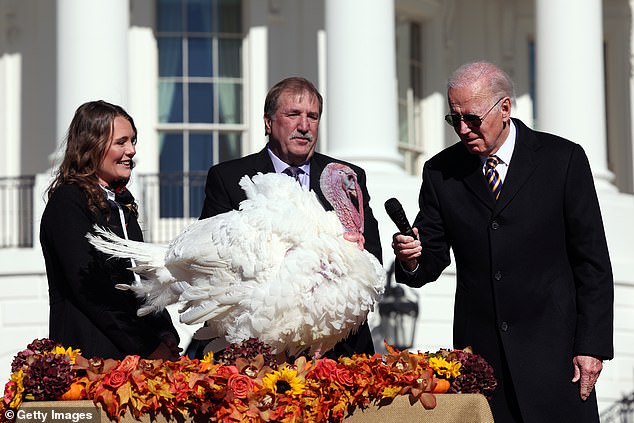 The stress surrounding putting a feast on the table is concentrated on Gen Z, according to a Personal Capital survey, which said 54% of Gen Z respondents and 51% of Millennial respondents are stressed about covering Thanksgiving costs.

Older respondents seemed to be less worried about the costs – only 33% of Gen Xers said they’d be stressed about covering the meal, while 39% of Baby Boomers said they were.

The cost of groceries has risen by 12.4% in October, according to the most recent Consumer Price Index, leaving Americans to look at cheaper alternatives.

In 2021, Americans paid an average of $53.31 for the holiday dinner, but now the meal, with all the fixings included, will cost up to $64.05, according to the latest survey from the American Farm Bureau Federation (AFBF).

The increase comes as the price of stuffing, sweet potatoes, veggies, pumpkin pies and almost all the usual Thanksgiving treats soar as inflation remains stubbornly high at 7.7 percent.

The biggest jump in cost, however, comes through the must-have turkey, with the centerpiece now fetching about $28.96, or $1.81 a pound.

There was also a difference in plans based on whether respondents had lost their jobs in the past year.

Those who lost their jobs are 17% more likely to hold a Friendsgiving rather than a Thanksgiving meal.

The celebratory week was kicked off this year when President Biden pardoned two turkeys at the White House on Monday with a pun-filled speech in which he promised there had been no ‘fowl play.’

It’s a wonderful Thanksgiving tradition here at the White House. There’s a lot to say about it, but it’s chilly outside so I’m going to keep this short,’ he said to enthusiastic applause despite the 40-degree weather. 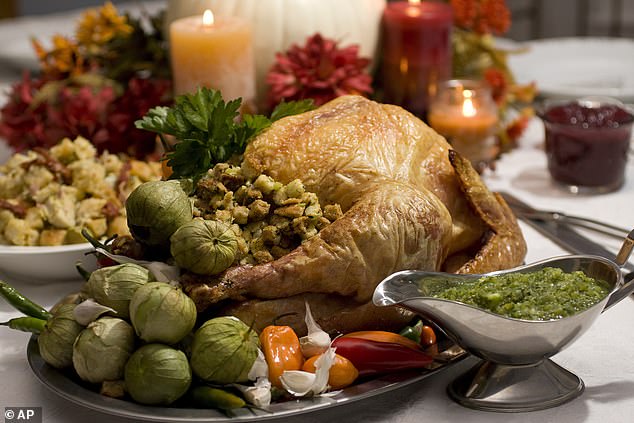 The biggest jump in cost this year comes through the must-have turkey, with the centerpiece now fetching about $28.96, or $1.81 a pound 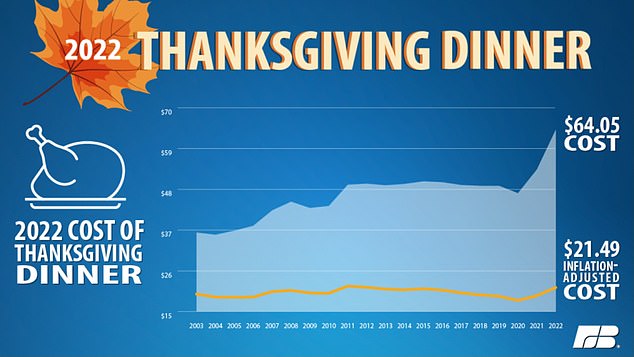 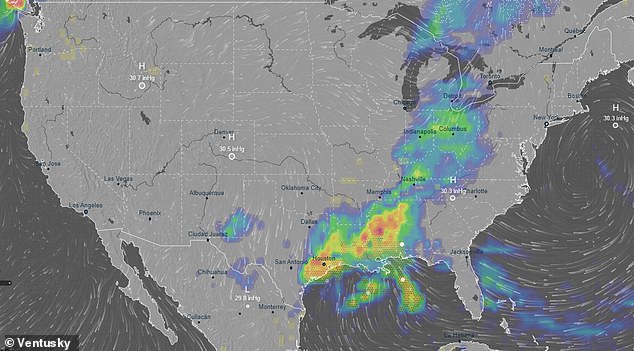 But many Americans may face hardship when they even attempt to go to Thanksgiving dinner as a major cross-country storm system takes shape.

Forecasters say a storm system moving into the Pacific Northwest on Tuesday could link up with moisture from the Gulf of Mexico by Thursday, resulting in widespread storms across the South and Midwest on Thanksgiving Day.

Nearly 55 million people will travel 50 miles or more from home for Thanksgiving, making it the third-busiest year on record and approaching the travel volume seen before the pandemic struck, according to AAA.

Experts expect severe road congestion around major cities, with traffic delays as much as double normal, and the highways around Atlanta, Chicago, New York City, and Los Angeles seeing the worst impact.

Another 4.5 million Americans plan to travel by air, reaching 98 percent of pre-pandemic levels even though airline schedules are still reduced by roughly 20 percent, AAA says.

Anticipate long TSA lines. If possible, avoid checking a bag to allow for more flexibility if flights are delayed or you need to reschedule,’ warned Mary Maguire, Vice President of Public and Government Affairs at AAA Northeast.

AAA says another 1.43 million Americans plan to use other modes of travel, like buses and trains, a sizeable 23 percent increase from last year.

Regardless of the mode of transportation you have chosen, expect crowds during your trip and at your destination. If your schedule is flexible, consider off-peak travel times during the holiday rush,’ said Maguire.