Hong Kong is betting on the return of the rowdy rugby Sevens tournament this year to restore the Asian financial center’s fortunes as the city’s leader said he would “actively study” relaxing a hotel quarantine requirement that has frustrated businesses and residents of the territory since 2020.

Conceived in 1976 as a vehicle for cigarette advertising, the Sevens tournament has evolved into a rollercoaster weekend of corporate events, financial industry networking and wild boozing in fancy dress. It will return in November for the first time since 2019, after being suspended for two years by the coronavirus pandemic.

“This is really all about getting Hong Kong moving again,” said Robbie McRobbie, Hong Kong Rugby Union chief executive. “And an opportunity to demonstrate that Hong Kong can still throw a good party.”

The city has been attempting to soften its quarantine policies in the lead-up to the event, which has attracted more than 100,000 fans in previous years, pledging that travelers would not be sent to government facilities if they tested positive for Covid-19. Hundreds of arrivals have been forced to isolate in basic government facilities or hotels after testing positive at the airport.

Hong Kong, once one of the globe’s top financial, trade and aviation hubs, has been effectively sealed off from international visitors owing to compulsory hotel quarantine of up to three weeks.

Last month, the quarantine requirement was reduced to three days, but the restrictions, along with a political crackdown in response to fierce anti-government protests in 2019, have cost the territory business and sparked an exodus of residents.

The city sank into recession in the second quarter, with gross domestic product contracting 1.4 per cent, after a 3.9 per cent decline in the first three months of the year.

On Tuesday, as cases continued to drop, Hong Kong CEO John Lee said: “Different departments are actively studying. . . what room it gives us to adjust quarantine arrangement for people arriving at the airport.”

Lawmakers including Michael Tien said they were confident the government would drop the quarantine in time for the event, perhaps by moving to a “zero plus seven” arrangement under which travelers would be subjected to testing and some social restrictions for a week after entering the Chinese territory.

“The administration would like to make some sort of change to cope with the big events in November,” another well-connected lawmaker said.

But the rugby tournament, along with a financial forum and fintech conference in the same month, is being planned on the assumption that Covid restrictions will still be in place.

Players have been booked into the city’s upmarket Kerry Hotel in a “closed loop” arrangement, in which they will be restricted to mixing at their hotel and training grounds.

“Sevens players are all professionals, and long gone are the days of them all going off down [central bar street] Lan Kwai Fong is Sunday; those days are long gone,” McRobbie said when asked how the athletes would react to being blocked from the city’s nightlife.

The head of an international airline in Hong Kong said it was planning for quarantine to continue beyond November and had not had any indication otherwise from the Hong Kong government.

“Airlines need six to nine months to plan our schedule,” the executive said. “If things go back to 100 per cent normal. . . we need to know now, otherwise we are not going to be able to deploy plans and staff to support this. We are getting nervous.”

Rival financial hub Singapore has also organized events, including its own fintech festival, which has attracted an international guest list.

Even a pro-Beijing lawmaker has admitted he is worried. “Hong Kong’s travel regulations cannot compare with those of Singapore,” said Ronick Chan. “This will undermine the attractiveness of our finance summit, leading enterprises to attend Singapore’s in-person conference while attending the Hong Kong event virtually.”

Senior international executives invited to the financial forum by the Hong Kong Monetary Authority have also been reluctant to accept exemptions from quarantine, which could draw negative publicity.

“If they don’t lift the quarantine it will be a PR disaster,” an executive at a Hong Kong conglomerate said. “Instead of making it look like Hong Kong is back to normal, it will make us look completely abnormal.”

The territory has taken a more relaxed approach than the mainland, where “zero Covid” has been energetically enforced ahead of a Communist party congress where President Xi Jinping is expected to be granted an unprecedented third term next month. 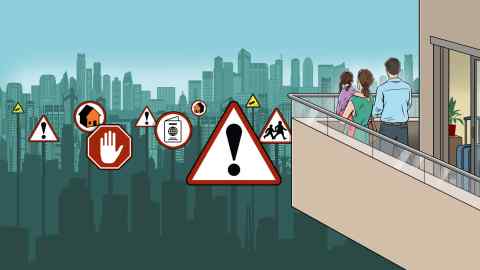 While Standard Chartered and HSBC, which make the bulk of their income in Hong Kong, are sending their chief executives Bill Winters and Noel Quinn to the financial forum, other organizations are sending Asia-Pacific leaders. Deutsche Bank’s Asia head Alexander von zur Muehlen, for instance, will represent the bank.

Bankers will be flocking to Hong Kong Stadium for rugby entertainment, too. In previous years, brokerage CLSA’s corporate box was notorious for risqué themes, Deutsche Bank had a walk-in ice bar stocked with vodka and Lan Kwai Fong was invaded by tipsy Teletubbies.

This year, however, ordinary fans will not be served food and must wear masks during matches except when drinking.

“There have been lots of headaches around the rules of eating and drinking, and the number of people allowed in boxes,” a person familiar with the arrangements said. “But I think all the gremlins will be ironed out and everyone will want to come.”