THE two joyriders who rammed a stolen car into a Garda vehicle are part of a 12-strong crime gang, the Irish Sun can reveal.

Gardai believe the chief suspects and their pals have been terrorizing residents in Ballyfermot over the past year.

Although concerns have been raised about their crimes from local representatives for the last year, their actions escalated on Monday night when they rammed the garda car.

The two chief suspects for plowing into the Garda car are just 13.

But the youngest member of the gang is believed to be just 12. 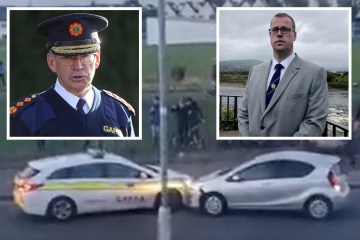 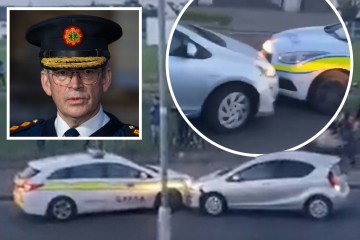 Gardai suspect the crazed drivers who rammed into the Garda car on Monday are using social media to taunt Gardai.

The hoods are using the videos to show off their stolen cars before challenging the gardai to catch them in high-speed chases.

They are also believed to commit thefts from cars for older criminals living in the area in return for cash.

Other crimes include verbally abusing pensioners as they go about their daily business.

Gardai believe their patrol car was rammed in revenge for a series of arrests being made in August.

The Garda Representative Association said: “Both Gardaí, having been medically assessed by their respective GP’s, subsequently are now off duty on medical advice due to their injuries.”

In the aftermath of this appalling incident, both Gardaí told the GRA that they were still trying to process the traumatic events, with one officer stating: “I’m alive, that’s the main thing. It was so daunting to see a mob baying for our car to be rammed”.

At present, gardai are continuing with their investigation into Monday night’s incident and have urged locals to come forward.

One local told us: “There is a core group of about 12 kids who have this place ruined and the guards know them.

“They are out of control and people are genuinely terrified of going about their daily business in case they are intimidated.”

Monday evening’s incident has raised the question of Garda resources in the area.

Mr Martin said: “In terms of Ballyfermot, there’s a multi-layered response that is required to this, in terms of both making sure we put services in and continue to add services and empower the community to deal with this from a bottom-up. approach and from a community-based approach, and support the gardai in terms of resources

“The gardai will get a handle on this, they will be able to deal with this.”