We expect natural gas to continue rising, to target the first resistance levels at 8,154.

Spot natural gas prices (CFDS ON NATURAL GAS) continued to rise during recent trading at the intraday levels, to achieve new daily gains until the moment of writing this report, by 2.93%. It then settled at the price of $ 7,518 per million British thermal units, after rising in trading on Wednesday for the session. It had a rate of 3.96%, during the past week, natural gas rose for the fifth week in a row, at 15.81%, in a short week due to the Good Friday holiday.

Prices extended gains after the US Energy Information Administration said on Thursday that domestic natural gas stocks rose by 15 billion cubic feet for the week ending April 8. This was more than the average weekly rise of 10 billion forecast by analysts polled by Standard & Poor’s Global Commodity Insights, but less than the five-year average supply rise of 33 billion.

Most financial markets are closed on Good Friday, including energy trading on the New York Mercantile Exchange. Thursday’s settlement was the highest for the nearest month contract since October 2008, and the five-week rally was the longest stretch of gains since October 2021.

Analysts say the catalyst for this week’s rush of natural gas was an explosion of late-season cold weather that is making its way across the United States, driving up heating demand in many parts of the country. The pipeline outage in Alabama also halted some natural gas supplies for an indefinite period of time, contributing to higher prices.

Geopolitical turmoil in Eastern Europe is also keeping the commodity supported, as Russian energy exports could stop at any time.

Technically, the price succeeded in breaking the current resistance level 7.181. The resistance that we had referred to in our previous reports as a price target for the recent price’s rise, was within complete control of the main bullish trend in the medium and short term along a slope line. Positive pressure is continuing to trade above its 50-period simple moving average. We notice the emergence of a negative intersection with the relative strength indicators, after they reached the areas of severe overbought operations. This may curb the upcoming natural gas gains, due to its need to dispose of some of this overbought, and to reap the profits of its recent rises.

While it remains above 7,181, we expect natural gas to continue rising, to target the first resistance levels at 8,154. 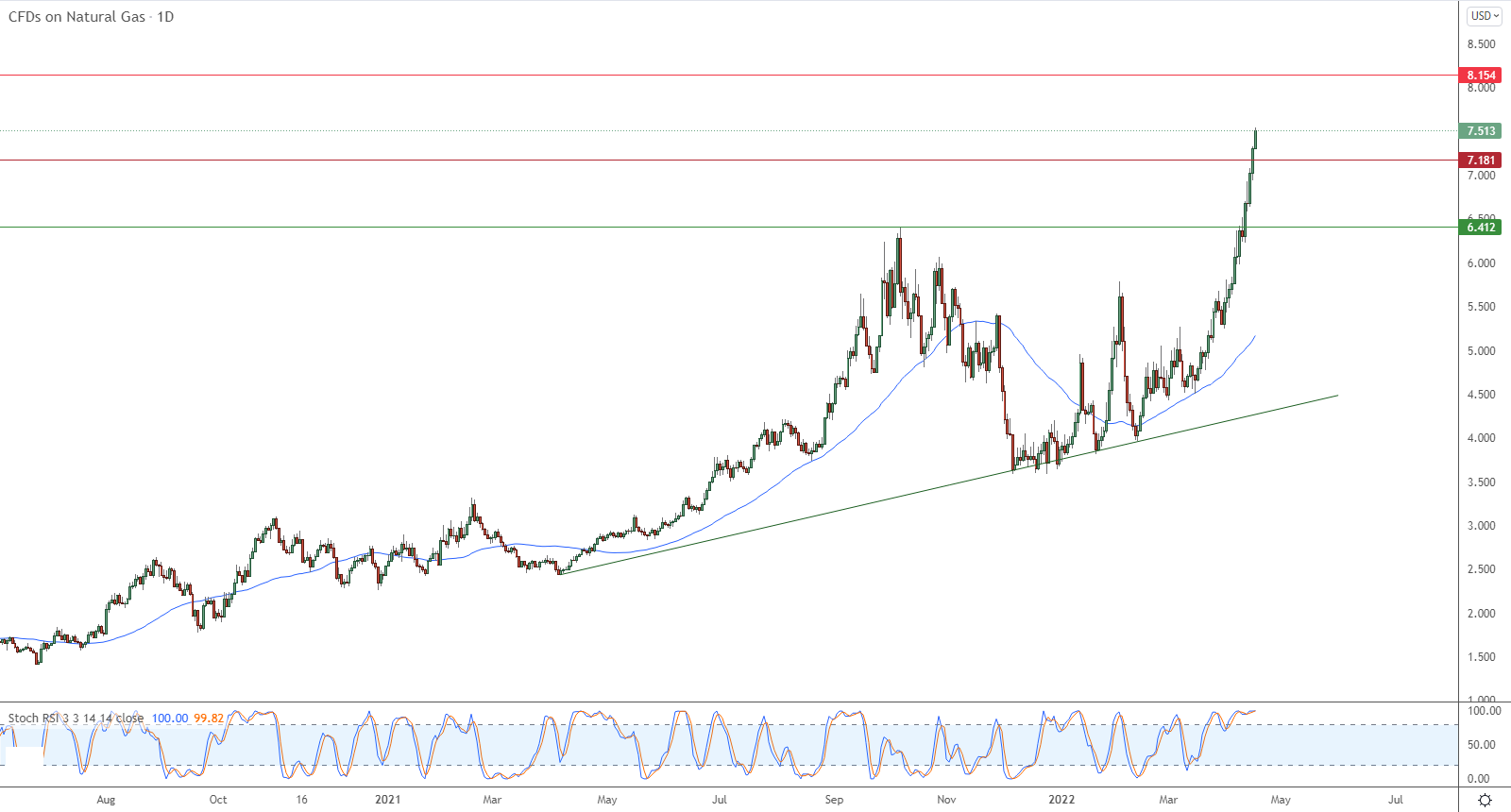