Porsche kicks off Europe’s biggest float in a decade

Porsche kicks off Europe’s biggest float in a decade: But costs crunch threatens to slam brakes on car-maker’s £65bn hopes

By Lucy White For The Daily Mail

Volkswagen is pushing ahead with the huge stock market listing of Porsche – despite investor jitters caused by Europe’s economic turmoil.

The car-maker is hoping that Porsche will attract a market valuation of £61-66 billion, with trading to start in Frankfurt at the end of the month.

It will be Europe’s largest listing in more than a decade, and the second-largest in German history, as Porsche aims to raise £8.3 billion in the initial public offering (IPO). 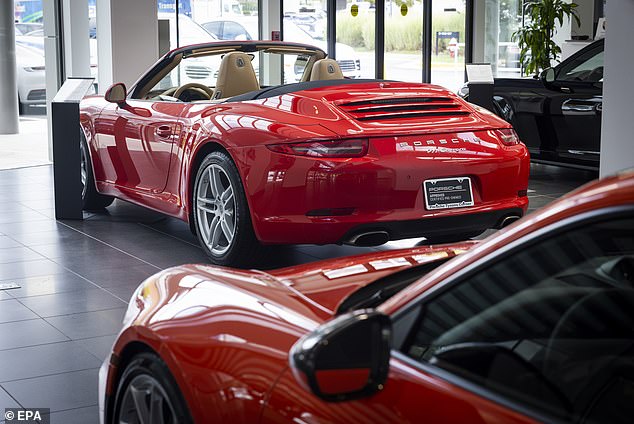 Listing: Porsche is hoping to attract a market valuation of £61-66bn, with trading to start in Frankfurt at the end of the month

The chunky float comes at a time of upheaval with red-hot inflation, rising interest rates and an energy crisis.

Uncertainty has caused investors to be wary of throwing their money at companies coming to the market.

But the Porsche float could kick-start Europe’s stock market after a quiet year. Arno Antlitz, Volkswagen’s chief financial officer, said: ‘We are now in the home stretch with Porsche and welcome the commitment of our cornerstone investors.’

Qatar, Abu Dhabi and Norway’s sovereign wealth funds, and investment house T Rowe Price, have committed to buying a total of up to £3.2 billion worth of Porsche’s shares.

The similarly named Porsche SE, Volkswagen’s largest shareholder, which is controlled by the billionaire Porsche-Piech family, will buy 25 per cent plus one of the ‘ordinary’ shares, which do carry voting rights.

It has committed to pay the IPO price plus a 7.5 percent premium, which will raise up to another £8.9 billion for Volkswagen. The deal will hand back control to the Porsche-Piech industrialist family after more than a decade.

Their influence has triggered governance concerns, as has the fact that Volkswagen boss Oliver Blume will stay on as chief executive of Porsche.

In total, Volkswagen is set to bag up to £17.2 billion from the IPO, and plans to distribute 49 percent of this to its shareholders through a special dividend.

The company will spend the remainder on boosting its electric car production and investing in software, it added.

Through money raised from investors in dollars, Porsche’s $9.4 billion listing would be the largest since Glencore raked in $10 billion in 2011 – almost double the amount which companies have raised in IPOs this year.

At a market cap of £66billion, Porsche would be worth almost as much as its entire parent company Volkswagen.