Prince Harry today (September 15) marks his 38th birthday, the first without his beloved grandmother Queen Elizabeth II. Express.co.uk spoke to body language expert Judi James about four key moments in the Queen and Prince Harry’s relationship over the years that showed just how close they were.

A member of the Wales family, and now the King’s family, Prince Harry was never expected to be King like his father King Charles III or his brother Prince William.

Because of this, the body language expert highlighted how Harry was able to have a more “relaxed” relationship with the late monarch.

Judi said: “The body language signals of the strong emotional bonds between Harry and his grandmother the Queen were always a joy to watch.

“Harry seemed to lack the caution of his brother and father when they were with the Queen and his more spontaneous, relaxed, fun approach seemed to bring out the same qualities in her. 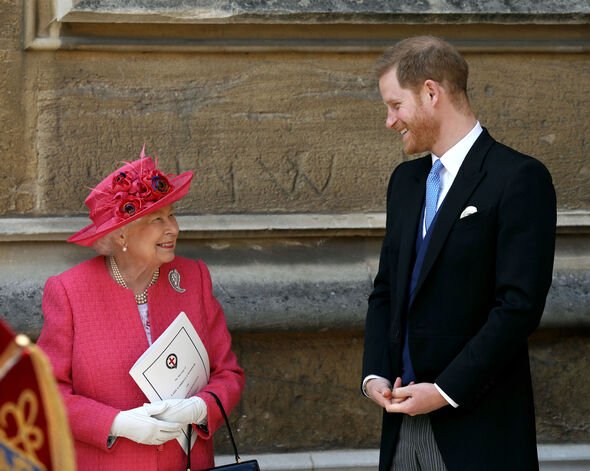 “As the second son, he seemed to be indulged by his granny, who presumably could enjoy his company and even his naughty side, without the burden of having to mentor a future heir to the throne.”

In 2019, shortly after the birth of his son Archie, the Queen and Harry looked deep in a happy conversation at the wedding of Lady Gabriella Windsor.

Ms James explained: “Harry always remained within the borders of appropriate behavior with the Queen and we can see him standing with his hands clasped in front of his torso as he watches his grandmother carefully to check her reaction as they share a laugh.

“He never looked over-awed by her, though, acting more like a loving grandson with his granny than a Prince with a Queen.”

She added: “Those matching naughty smiles were back at Lady Gabriella’s wedding in 2019 when Harry looked close to giggling in delight while throwing a very warm smile down on his clearly loving grandmother.”

Harry also very publicly showed his love for the Queen when he joined her for the RHS Chelsea Flower Show in 2015, offering up a loving kiss and embrace before they toured the exhibit.

Judi opined: “At the Chelsea Flower Show, he uses one hand to keep his tie and jacket in place as he bends low to perform a very loving kiss on the cheek and her raised hand suggests an endorsement of that affection.”

Harry’s close relationship with the Queen in adulthood was an extension of their bond when he was younger, and the Duke touched upon his earlier memories of the late Queen in his personal tribute.

Harry said in a statement on his Archewell website: “Let us echo the words she spoke after the passing of her husband, Prince Philip, words which can bring comfort to all of us now: ‘Life, of course, consists of final partings as well as first meetings.’

Prince Harry greeted the Queen with a kiss at the Chelsea Flower Show in 2015 (Image: GETTY)

The Queen made Prince Harry laugh during the Sovereign’s Parade at Sandhurst in 2006 (Image: GETTY)

“Granny, while this final parting brings us great sadness, I am forever grateful for all of our first meetings—from my earliest childhood memories with you, to meeting you for the first time as my Commander-in-Chief, to the first moment you met my darling wife and hugged your beloved great-grandchildren.

“I cherish these times shared with you, and the many other special moments in between.”

The Queen was often pictured chatting and holding Harry’s hand when he was a little boy, and her joy at seeing her grandson at the Sovereign’s Parade at Sandhurst in 2006 was clear for all to see.

Judi added: “We can see the Queen bending to talk to him as a small boy, and then that wonderful moment when she seemed to break with tradition to try to make him laugh while he was standing formally to attention on the parade ground.

Prince Harry and Prince William with their grandmother the Queen at the pole in 1987 (Image: GETTY)

“Their smiles here are mirrored and matching, illustrating what looks like a shared and rather naughty sense of humor.”

The Queen was by Harry’s side at his darkest moments, staying with him and his brother at Balmoral after the death of their mother Princess Diana in 1997.

Harry’s devotion to the Queen was unwavering in her final years, and he and his wife Meghan, Duchess of Sussex named their first daughter after her.

Harry and Meghan now reside in the US, but the Sussexes have been in the UK for more than a week now to pay tribute to the monarch’s life and legacy.

Last week the Duke and Duchess joined the new Prince and Princess of Wales for a walkabout in Windsor, where they viewed tributes to the Queen and spoke to the public about their profound loss.

Harry and Meghan also attended a special ceremony in Westminster on Wednesday to mark the beginning of the Queen’s lying in state.

Harry poignantly walked behind his grandmother’s coffin in a procession through the streets of London alongside his brother and the new King.