Prince Louis showed off his mischievous side as he danced outside Windsor Castle before making several attempts to clamber into the back of a 4×4 as the Cambridges left the castle following the Easter weekend.

In adorable footage, the young prince, three, exited the castle ahead of his parents, dancing towards the waiting 4×4 with a toy in hand.

His mother Kate Middleton soon joined him near the boot of the car, alongside Princess Charlotte. Kate loaded bags into the back of the 4×4, before attempting to scoop up Prince Louis and put him in the car.

However, the cheeky prince jumped back down to the ground before trying to make his own way into the boot. After initially failing, Louis gave himself a few more paces and took a running jump to get into the back of the 4×4.

As the prince held on with his legs flailing, Kate pushed him fully inside the car before Louis clambered through a gap and into his seat in the back – as his elder brother Prince George arrived.

Louis’ adorable adventure triggered laughs among the watching crowd, who were seeing off the Cambridges as they left Windsor Castle. The royals were filmed in the quadrangle by a family visiting from Rochester.

Prince Edward, Lady Louise and Viscount Severn were also filmed leaving at the same time as the Cambridges, with Princess Beatrice and her family leaving a few hours earlier.

The footage comes after William and Kate joined other members of the royal family all dressed in blue for the annual Easter Sunday service yesterday. 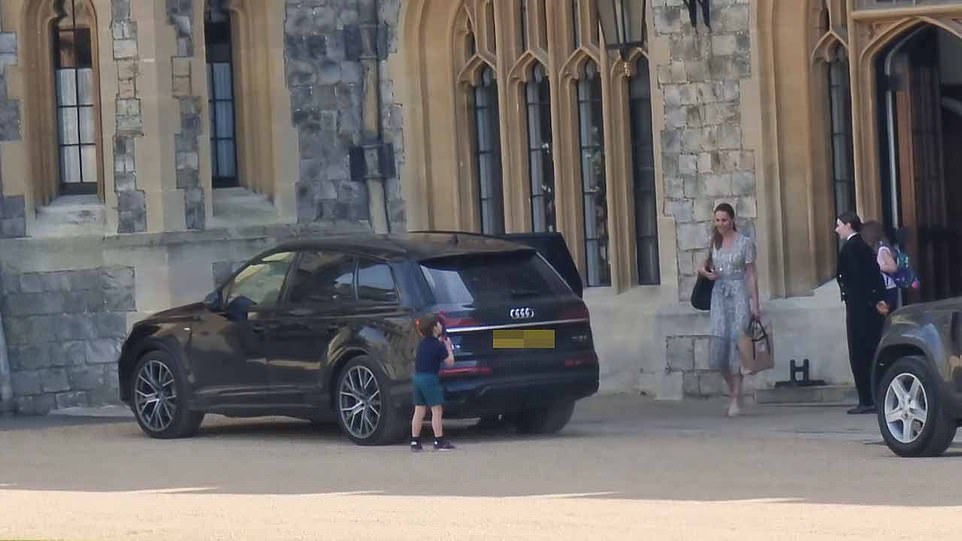 Prince Louis waved his toy around after leaving Windsor Castle this afternoon, with his amused mother Kate Middleton following behind him 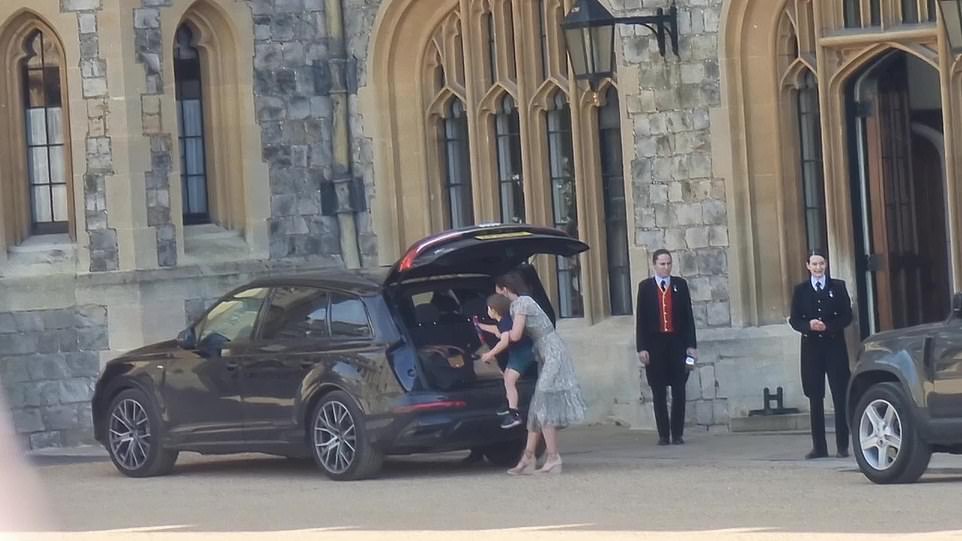 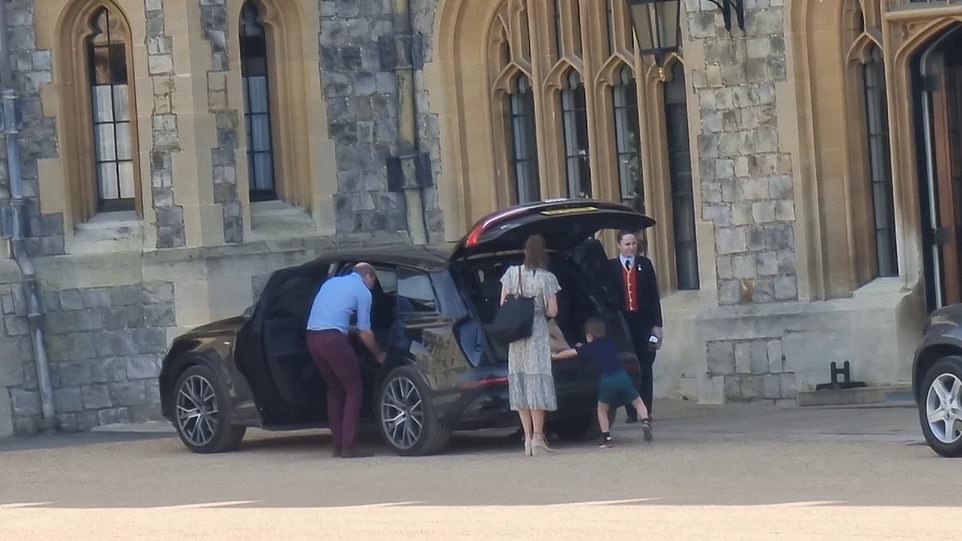 Louis then took an adorable run and leap to try and clamber into the back of the 4×4, while his siblings both got in 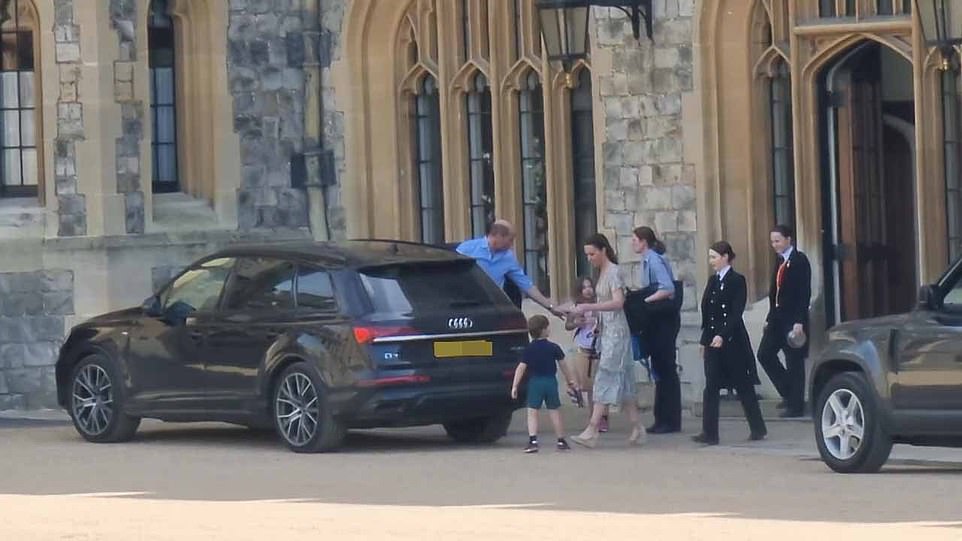 Louis’ adorable adventure triggered laughs among the watching crowd, who were seeing off the Cambridges as they left Windsor Castle.

Before Louis’ appearance, Prince William put the family’s cocker spaniel in the front seat of the car, before loading some bags in the boot.

The Duke cut a dapper image, with a bag over his shoulder and shirt-sleeves rolled up. He was later seen in conversation with aides.

Prince William later re-appeared with his family, with Princess Charlotte being led out by her nanny Maria Teresa Turrion Borrallo, who helped the family load their 4×4. As the family were finishing loading the car, Prince George arrived, dressed in shorts and a t-shirt.

Another clip, a bit further along from the castle entrance, showed Prince Edward’s son James, Viscount Severn, loading a car with bags.

The 14-year-old was then joined by his father, as the two moved luggage around in the boot of a car to make space for a large box.

His sister, Lady Louise Windsor, was also filmed preparing to leave the castle, getting a bag out of a 4×4 before being driven away in a car.

Another clip, from two hours earlier, showed Edoardo Mapelli Mozzi carrying his and Princess Beatrice’s daughter Sienna to a car while on the phone. They were later joined by Beatrice and his son Christopher, known as Wolfie.

Beatrice held hands with her step-son, with the couple trailed by Prince Louis and his nanny.

On Sunday, William and Kate were accompanied by George and Charlotte as they stepped out in the spring sunshine for the event at St George’s Chapel, Windsor Castle on Sunday.

Kate wore light blue, as did her daughter, who held William’s hand as she walked to the chapel in the grounds of the castle. Prince George, like his father, wore a suit and tie. 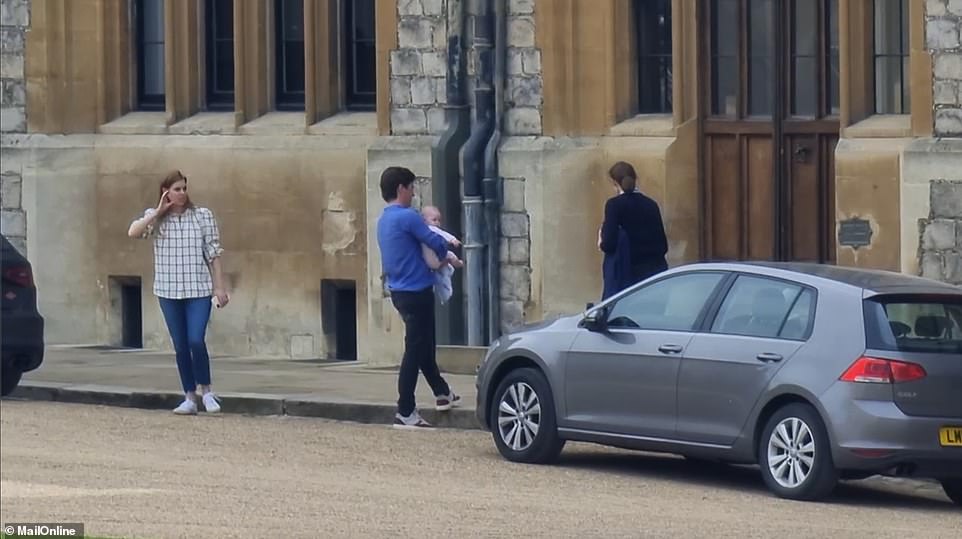 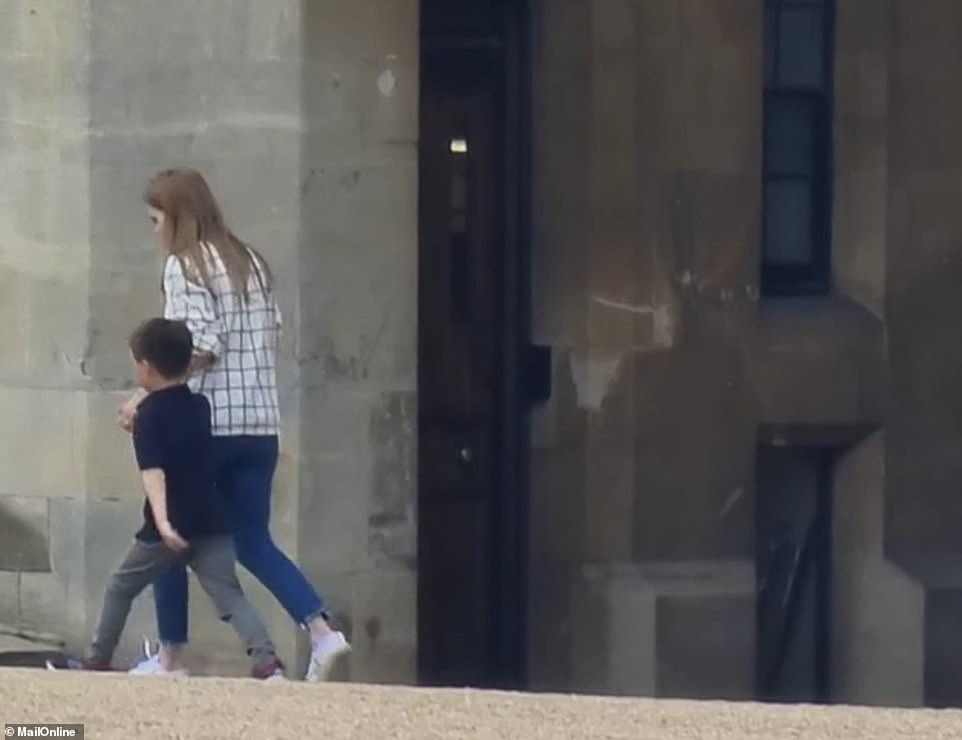 Beatrice held hands with her step-son Christopher, known as Wolfie with the couple trailed by Prince Louis and his nanny 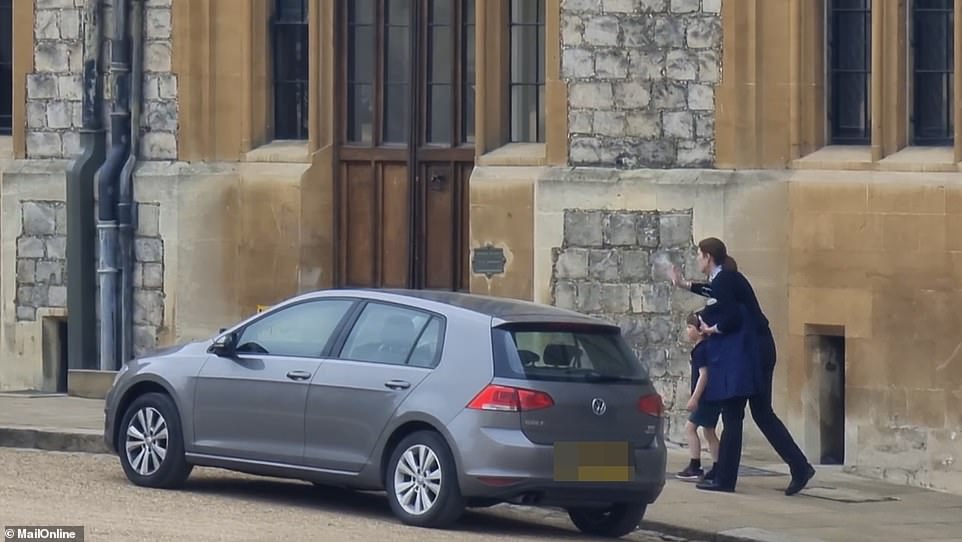 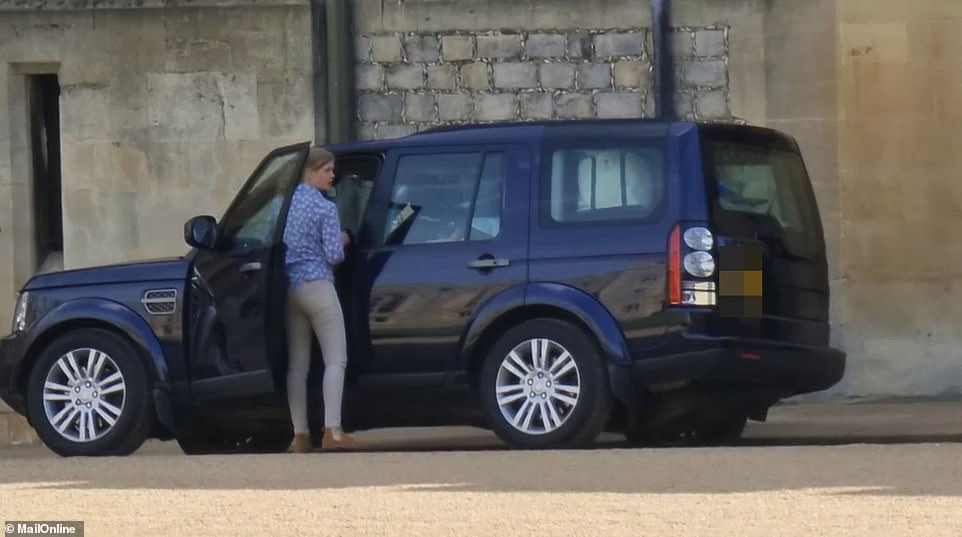 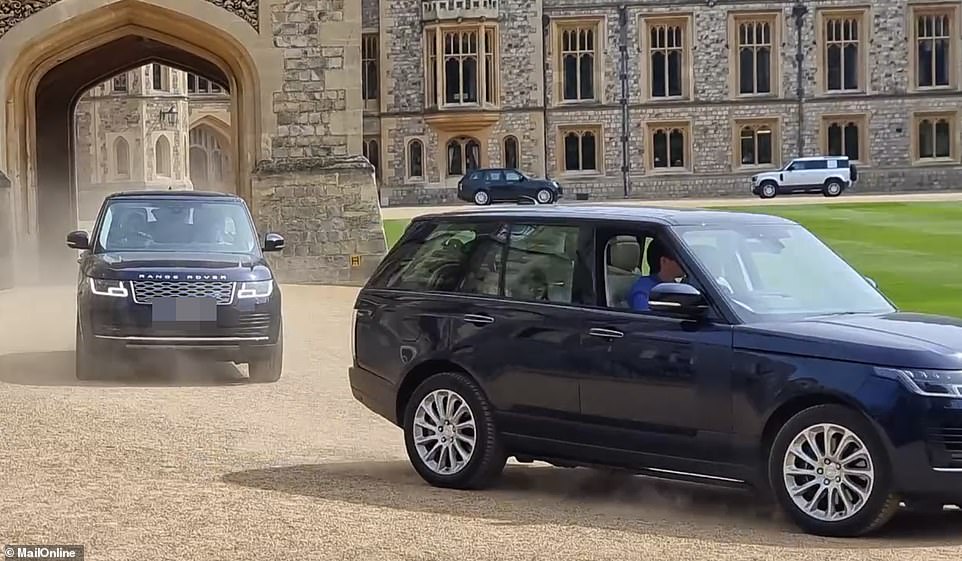 The eight-year-old future king shook hands with the Dean of Windsor, the Right Rev David Conner, as they left the service, with William wishing him a happy Easter.

Kate and William smiled at a small group of members of the public as they walked back towards the castle.

Behind the Cambridges were the Earl and Countess of Wessex with their children, Lady Louise Windsor and James, Viscount Severn.

The Cambridge Children’s Easter Sunday outing follows another rare public appearance last month in honor of their great-grandfather, the Duke of Edinburgh.

The Cambridges missed Harry and Meghan’s whistle-stop visit to the UK because they were enjoying a skiing holiday in the French Alps.

Prince William and Kate were reportedly staying in the resort of Courcheval, with a picture circulating online of them watching their eldest son Prince George enjoy a skiing lesson. 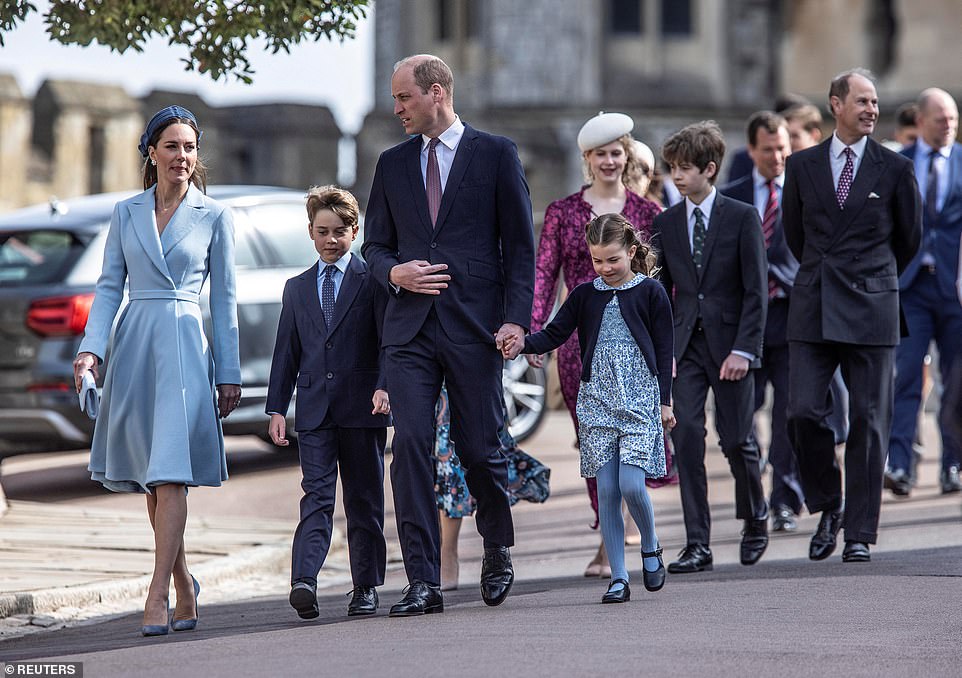 Members of the Royal Family walk as they arrive to attend Easter Mattins Service at St. George’s Chapel at Windsor Castle 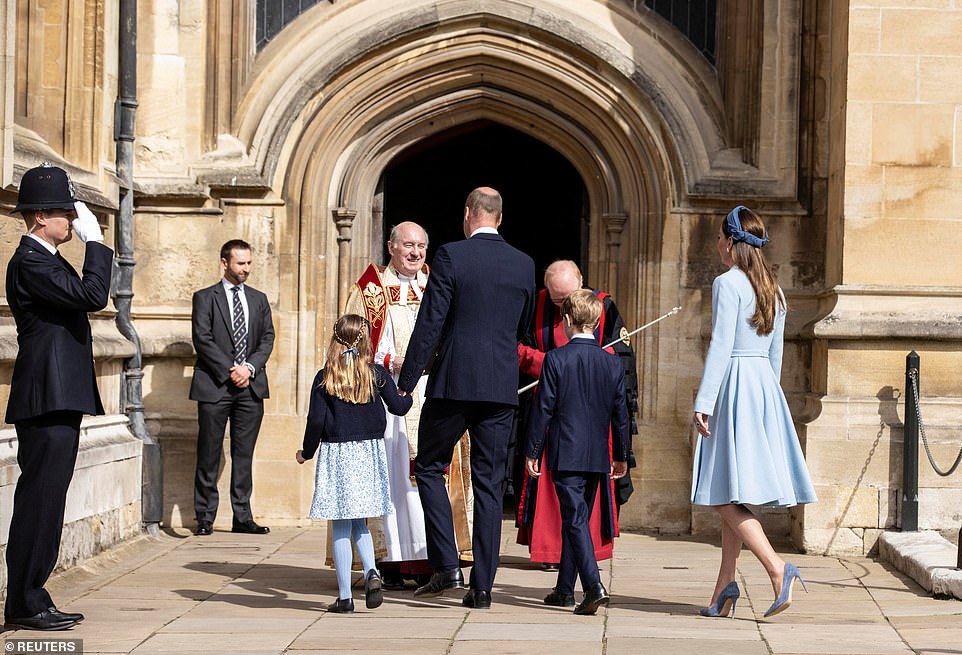 The Duke and Duchess of Cambridge leave after the Mattins Service at St. George’s Chapel at Windsor Castle in Berkshire 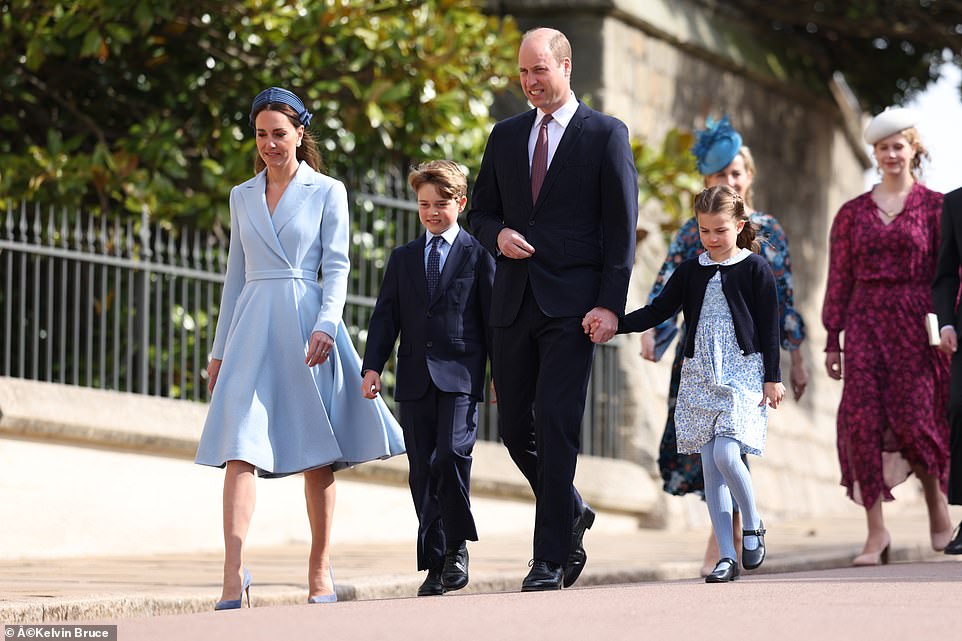 Royal correspondent Robert Jobson said it was ‘significant’ that the couple were not involved in the meeting between Harry and Meghan and other senior royals.

The brothers’ relationship is understood to be at rock bottom since Harry pressed the nuclear button on his royal life.

The Duke and Duchess of Sussex made a trip to visit the Queen on Thursday on their way to open the Invictus Games in the Netherlands, which began in the Hague over the weekend.

The visit, which was the couple’s first joint trip to the UK since they stepped down as working royals in 2020, was billed as a peace offering and also saw Prince Harry visit with his father Charles for a brief 15-minute meeting.