“This is a dangerous and potentially life-threatening situation. Take cover immediately, if threatening weather approaches,” the ECCC said in its warning.

The agency added: “Go indoors to a room on the lowest floor, away from outside walls and windows, such as a basement, bathroom, stairwell or interior closet. Leave mobile homes, vehicles, tents, trailers and other temporary or free-standing shelter, and move to a strong building if you can. As a last resort, lie in a low spot and protect your head from flying debris.”

More on the storm timing and impacts, below.

A large system will impact all three Prairie provinces Thursday, bringing everything but the “kitchen sink” from eastern Alberta through to western Manitoba.

For central Saskatchewan and parts of central and southern Manitoba in particular, there is a heightened risk of severe weather to bubble up. 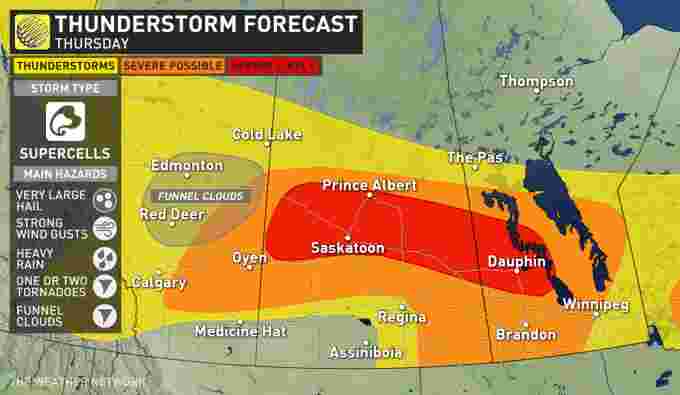 TORNADO 101: What you need to know about staying safe

An elongated boundary tracking across the central Prairies and associated upper level trough swinging into the western Prairies will be the triggers needed to spark widespread thunderstorms through the afternoon and evening hours.

There’s a threat for very large hail, strong wind gusts and even some tornadic activity where the storms will be the strongest. It’ll be important to stay up-to-date with the weather watches and warnings that may impact your area.

RELATED: Twister confirmed to have touched down near Sask. wind farm Monday

In parts of southern and central Alberta, the ingredients are also there for funnel clouds to develop with colder air aloft.

Storms are likely to continue overnight across eastern Saskatchewan and southern Manitoba.

READ MORE: Here’s what to stock your vehicle emergency kit with, BEFORE you hit the road

Cooler weather will spread east across the region for the weekend, with a brief warm-up early next week, followed by near to below seasonal temperatures for much of the week.

Be sure to check back for the latest updates across the Prairies.