Zeros and ones, qubits, superpositions, quantum photonics, entanglements, subatomic particles, artificial molecules; all terms that can sound like a foreign language — and that is because, in some sense, the world of quantum computing is.

Ph.D. students Jaime Diaz and Taylor Begay-Wilson worked on a project in Bertrand Cambou’s class using IBM’s open software development kit, called qiskit, to better understand quantum computing and its concepts such as qubits — a unit of measurement for information storage in quantum computing for two distinct types of research in this emerging field. It started when IBM, one of the largest technology corporations in the world, delivered a seminar in Cambou’s class and opened the door for students to do coding work with IBM.

You can think of quantum computers as supercomputers, though they may or may not replace classical computers. They are superior in several aspects, such as executing fast searching algorithms through large databases, breaking cryptosystems and molecular modeling, which could revolutionize medical research.

Diaz and Begay-Wilson didn’t just wake up one day and set out to research one of the most critical upcoming fields of physics. Their journeys began when they were young, and both traced back to a passionate person encouraging personal and scientific discovery. 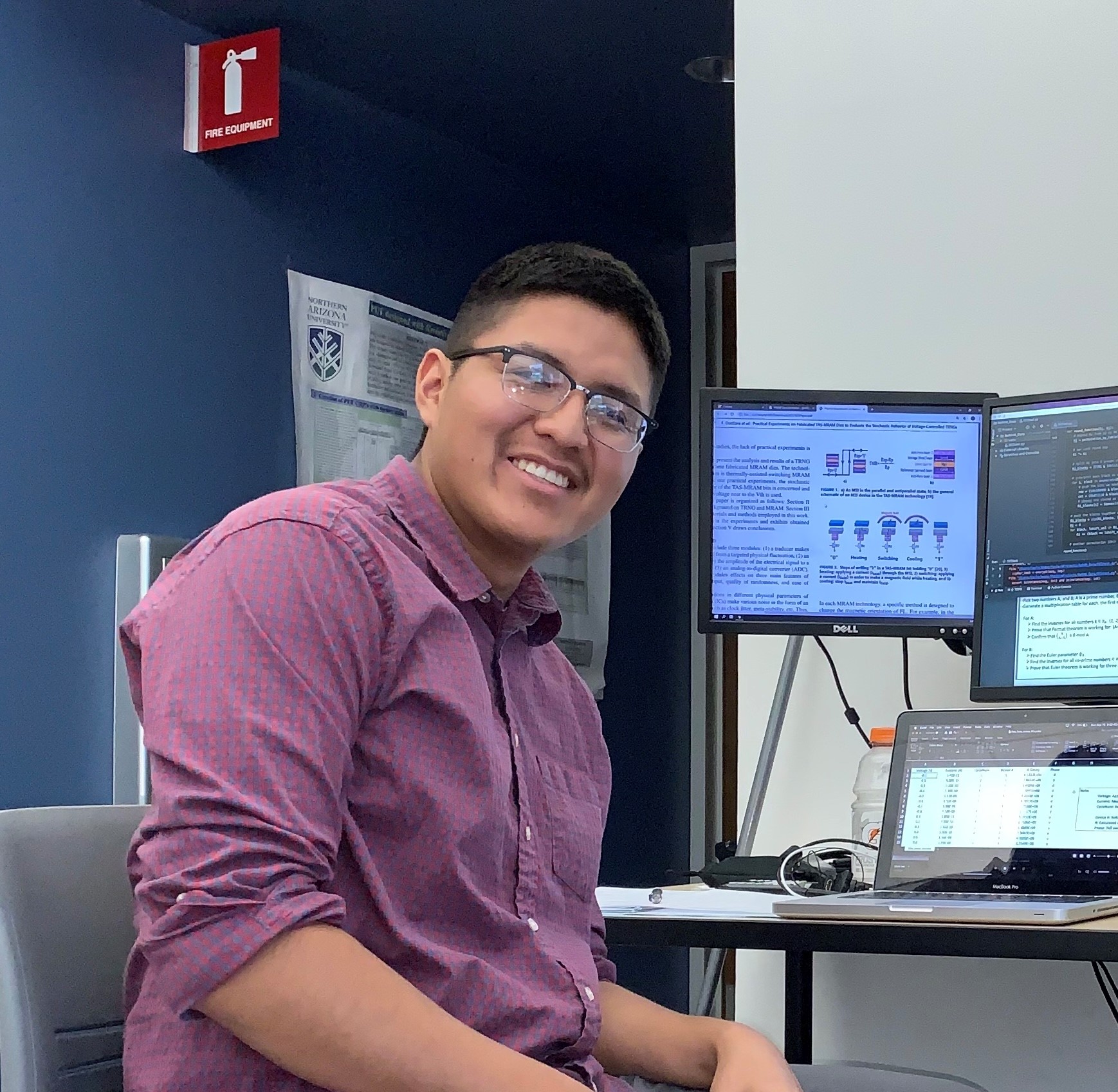 Begay-Wilson grew up in Red Mesa on the Navajo Nation. Sometimes, it felt that there were a lot of external challenges he and his family had to face, but when he went to school, he knew the teaching staff was there to help students tackle any adversity that might come their way. The teaching staff emphasized the importance of higher education and made it clear that they wanted to see their students thrive.

“Even for those who did not want to be academically pushed, it became apparent that the teaching staff wanted their students to excel and establish a presence outside of the reservation for greater opportunities,” Begay-Wilson said. “Their passion for teaching grew on me and ignited my curiosity. That feeling of understanding complex topics like trigonometry and fully understanding the material gave me a huge sense of accomplishment. ”

At Begay-Wilson’s high school, each academic year began with a talk from alumni, giving motivational speeches to inspire students to thrive. These recent graduates, who now work successful careers in various industries, share the stories of their own success, and the impact their education has had on them

“Ever since then, it has been a dream and goal of mine to be like those alumni guest speakers,” he said. “After I acquire my doctoral degree, I will go back to my high school and give a motivational talk, similar to the speeches I heard over the years to influence the next generation of students. Because I know the struggles of those living on the reservation, like how the majority experience poverty, have no electricity or running water and face alcoholism there is an opportunity for me to speak about how, despite the difficulties of growing up on the reservation, there is always an opportunity to be on the positive side of the statistics. ”

And he will have a lot to talk about. Begay-Wilson’s focus is on expanding the security of computers. By implementing a quantum true random number generator (QTRNG), where the unpredictable nature of qubits in a superposition state is exploited, they were able to demonstrate true randomness, which can be used to strengthen cryptographic schemes. Since quantum computing will eventually have the processing power to break existing cryptosystems used today, there is a need for stronger security in which the approach is quantum resistant. It is such a new field, randomness and post quantum cryptography is key to defending against such attacks.

“By the end of this year, IBM looks to increase its qubit count to 433 qubits, or 2433 possible configurations which are more configurations than there are atoms in the observable universe! ” Begay-Wilson said.

He hopes to work in the emerging memory industry — maybe working on research that ravels on space missions to provide cyber security. 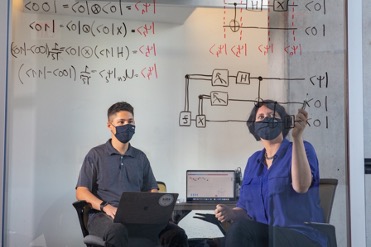 “The general idea is to use qubits to model molecular interactions, or in my case, energy transfer between artificial molecules,” Diaz said.

He always found math and science interesting, but never really considered it as a career path until one day, his uncle took him to an event at work where Diaz was able to play with liquid nitrogen and see a thermal image of himself.

“From that point, I stumbled my way into higher education as a first-generation college student and now into graduate school,” Diaz said. How does one stumble into the ever-advancing field of quantum computers, you may wonder?

“I, very much at the last minute, was convinced I should try to get my Ph.D.,” he said. “I was part of a few programs aimed at helping minorities like myself advance in STEM. One of my mentors urged me to apply to graduate school because they saw potential in me, so I did. ”

He ultimately chose NAU because the Applied Physics and Material Science program seemed like a perfect fit.

“The people in my department are outstanding scientists and, more importantly, outstanding humans,” he said. Originally wanting to be an experimentalist, Diaz was convinced by his adviser, associate professor Inès Montañoto join her group that mainly does theoretical work with quantum physics.

“Quantum physics is my favorite area in physics because of how weird things get in the quantum regime,” Diaz said. “I was very unsure of what I wanted to do for research at first because I find everything extremely interesting, it’s just in my nature. After some early struggles, my current research project was put on the table, and I quickly realized this is what I wanted to do. Something about using quantum physics to study natural processes is really cool to me. And now I don’t get as distracted by other quantum related projects because I’m so invested in this one. ”

Though Diaz hasn’t narrowed down what he wants to do after graduation (he still has a few semesters), he knows that he wants to help underrepresented groups pursue higher education in STEM.

The applications for QC are endless. It could replace existing computing methods, classical computers as we know them and even disrupt the entire information age, Cambou said.

“Our job is to prepare our students to have successful careers. The environment is moving fast, and new technologies can disrupt the status quo, ”Cambou said. “Therefore, we want to be sure that our students are ready to understand and endorse these changes, not to become the victims of an ever more complicated environment.”